The memorial service will be available online by livestream: https://thepop.church/watch/
​OR CLICK HERE FOR: YouTube - Pentecostals of Phoenix 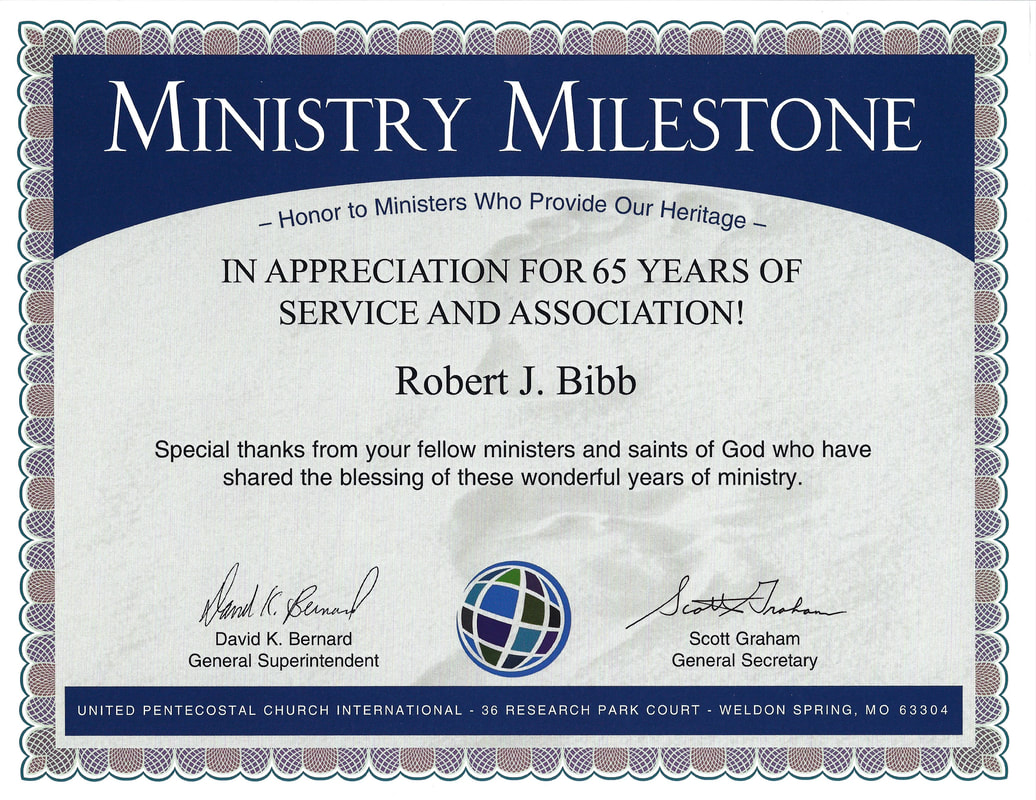 His journey from Oklahoma to Arizona was a long one as his family moved to San Francisco, CA in 1942 to work in the war effort when he was still a young boy. As a young man Robert Bibb went to barber school and then joined the US Navy where he served during the Korean conflict. He was stationed in San Diego, CA, when he was converted to Christ and received the Holy Ghost while visiting church services at Revival Tabernacle, pastored by David Gray. This is where he met the love of his life who was visiting from Idaho. After a brief courtship he married Lavina Elaine Sellers, November 9, 1953 in Jerome, Idaho.

He committed his life to following Jesus and soon began to feel a call into the ministry. They moved to Portland, Oregon where he attended Conquerors Bible College. In 1957 he assumed the pastorate of the United Pentecostal Church in Pocatello, Idaho. He supported his family as a professional barber and worked to grow the church until he was able to devote himself full time to the ministry. He pastored in Pocatello for eighteen years. While pastoring there he served in leadership roles of the Idaho District of the UPCI, both as Youth President and as a District Presbyter.

Music was always a passion for Robert Bibb. In the Navy he led a country western band named, “Bob Bibb and the Western Rhythm Masters.” As their four children grew up he was intent on teaching them music, to play instruments, and to sing. They learned a variety of instruments and began playing and singing in churches and for holiday gatherings. In 1975,  Robert Bibb resigned the church in Pocatello to travel with his family in evangelistic meetings. They were called, “ The Bible Singing Bibb Family.” They toured throughout the Northwest and British Columbia, then in California, and eventually toured throughout the southwest, reaching as far east as Tennessee.

In 1981, Robert J Bibb assumed the pastorate of Calvary Apostolic Church (now, Pentecostals of Phoenix) in Phoenix, Arizona, where he served the church for thirteen years before he resigned from the pastorate in 1994. His son, Rob Bibb, was elected as the pastor.

Robert and Elaine Bibb continued to pursue their calling through evangelizing and supporting other ministries. In 2001, after the sudden death of Pastor Leroy Hampton in Gilbert, Arizona, they offered assistance to the church and filled in when needed for three months. Then the local congregation asked him to remain as pastor for Abundant Life Church. Brother Bibb agreed to temporarily fulfill the pastorate. This arrangement turned into an eight year assignment.

Finally ready to retire, they convinced their son-in-law, Terry Baughman, and their daughter, Gayla, to consider assuming the pastorate in Gilbert. The church voted unanimously in favor and Terry Baughman became co-pastor in 2008 and assumed the pastorate when they moved on location in 2009.

Elder & Sister Bibb continued to support both of the church congregations they previously pastored in Arizona, spending time with the Pentecostals of Phoenix and LifeChurch in Gilbert. Brother Bibb served as long as he was able for the next eleven years as an Elder at the Pentecostals of Phoenix and Pastor Emeritus at LifeChurch until his death. He was an ordained minister of the United Pentecostal Church International and recently received the “Ministry Milestone” recognition for his service of sixty-five years.

He leaves behind a long legacy of Christian ministry. He and his wife Elaine Bibb have four children. They and their spouses are active in ministry. Daughter Gayla and Terry Baughman pastor LifeChurch in Gilbert, Arizona. Daughter Jolene and Ricardo Rodriguez attend United Pentecostal Church in Klamath Falls, Oregon, where Jolene is the women’s ministries director. Daughter Tamra and Alvin Crosson pastor Life 365 Church in Denton, Texas. Son Rob and Connie Bibb pastor the Pentecostals of Phoenix church. They have nine grandchildren, many of whom are active in ministry as well, and eight great-grandchildren with another on the way. He will be deeply missed by his family and all of his church family.

We will miss having Elder Robert J Bibb with us, but we rejoice in knowing it is better, “To be absent from the body and to be present with the Lord” (2 Corinthians 5:8). 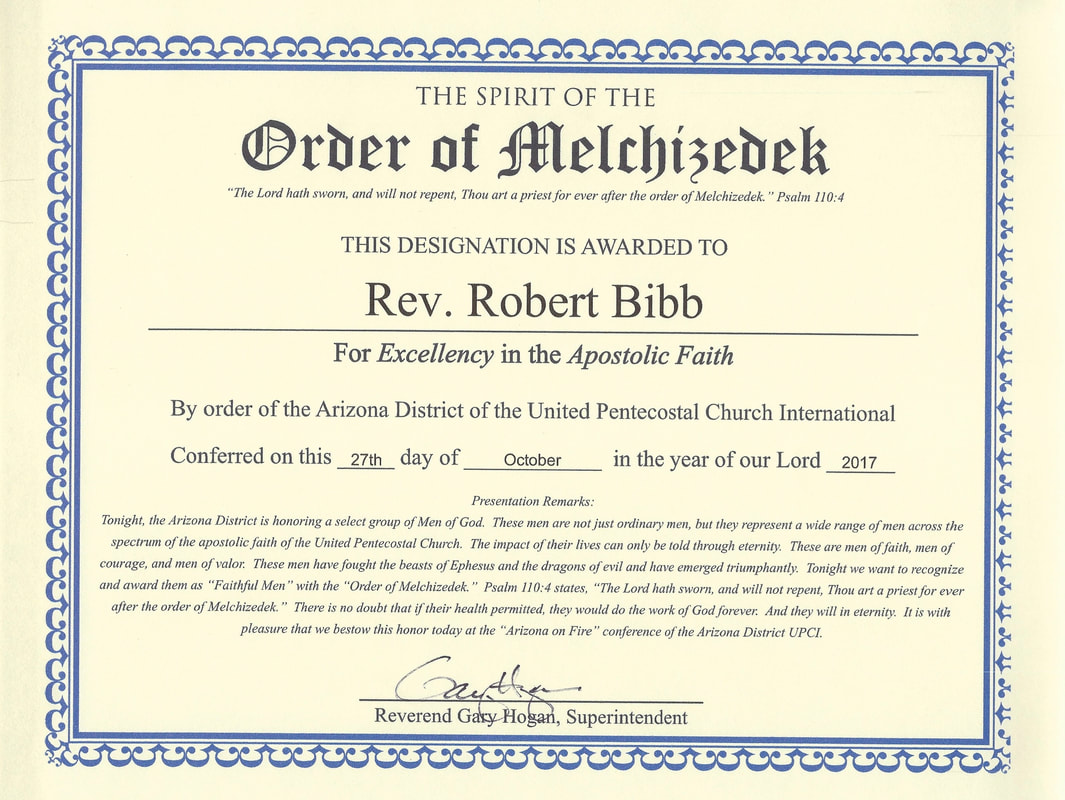