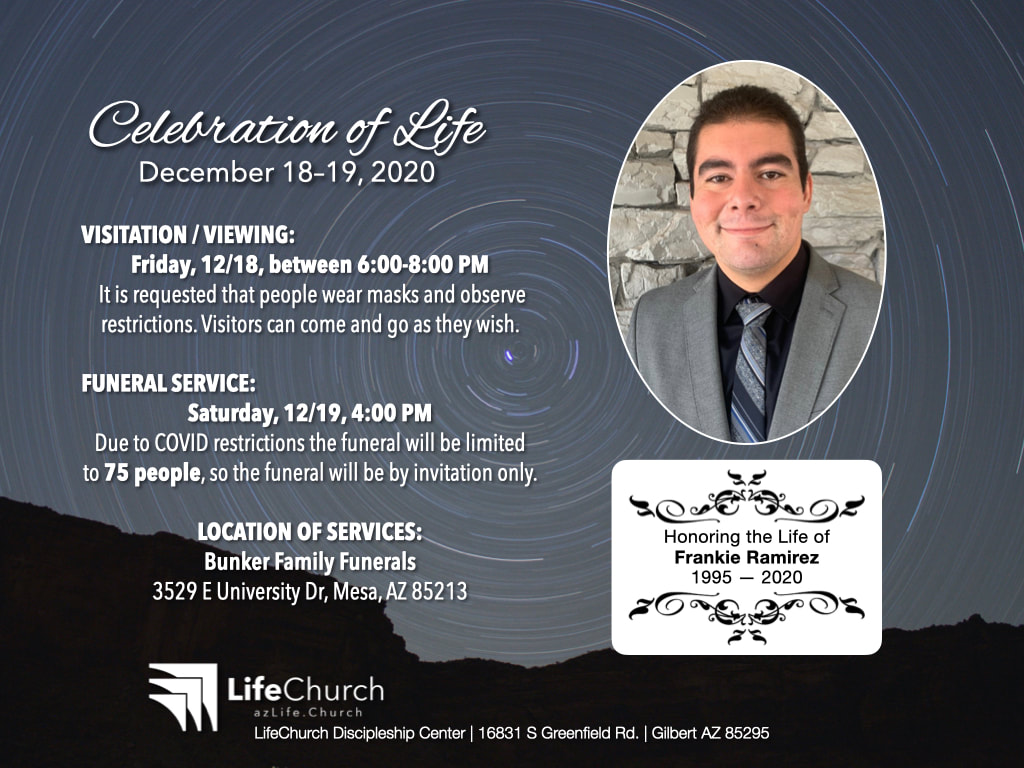 The memorial service will be live-streamed on Facebook: www.facebook.com/LifeChurchAZ
For those who would like to assist the family with funeral expenses you may give through LifeChurch. Please designate in the memo or notes: "Ramirez". Thank you for your loving support. Click HERE to Donate.
​
Obituary
Frank Castellanos Ramirez
​July 5, 1995 - December 11, 2020
Frank Castellanos Ramirez was born July 5, 1995, in Chandler Regional Hospital, Chandler Arizona. He was raised in Gilbert and graduated from Gilbert High School. From the age of four he began playing soccer and competed on various teams. Growing up his friends recognized his love for church and soccer and called his family “chur-cers” because of their involvement in both. Many times he left his friends early to get home in time for church.

He attended Chandler Gilbert Community College and studied auto mechanics. He continued his education at Mesa Community College studying Computer Information Systems before pursuing a business degree from Arizona State University. He graduated with a Batchelor of Arts Business degree in the W.P. Carey School of Business, December of 2019. In the Covid-19 shutdown recession gripped the nation. Frankie sought employment to utilize his recent education and eventually was rewarded with a position as an investment broker with Merrill, a Bank of America company.

Frankie had a love for music. He played the saxophone from the fifth through the twelfth grade and performed in the school’s marching bands. His love for music expanded to the guitar and keyboard, but he eventually found his greatest passion in playing drums for the praise team at church. He also used his vocal talents and sang on the praise team at LifeChurch, Gilbert, and joined Arizona Praise, a combined Christian choir from several churches in the metro Phoenix area for a year. He was very active in his church and began mentoring young aspiring musicians who want to learn drums and other instruments.

Frankie is survived by his father and mother, Victor and Lucia Ramirez; siblings: Antonio, Ricardo, Andrew, Victor Jr, and Victoria; and six nieces and nephews: Makinzee, Emily, Adalynn, Ty, Jaxx, and Crew.
​
He will be greatly missed but never forgotten.